Trading is a type of mission that can only be performed on a caravan (whenever a caravan is present) or at the other faction's fortress (when the player has a City Hall). When a trader's caravan appears (for a limited time), the player can select the grid that caravan is on, then select the mission. Currently the game supports trading weapons, nonweapons, craftable items, and resources. Note that Gustav only exists as a caravan and does not have a fortress of his own, and that different factions will sell different items. (Example: Riffs will sell more ammo, and the Pig farmers will sell more food.)

Note. AFAIK difficulty doesn't come into play here just as it normally doesn't for scouting. Even on impossible difficulty across the whole map in an non-scouted tile I've never seen any real danger on a trading mission.

Before the actual trade screen appears, the player are presented with three dialogue options: 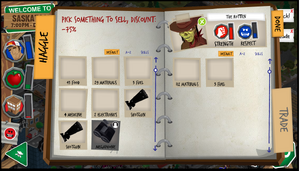 Trading is the best way to raise a faction's respect, as meetings with factions can cost a lot of time and valuable resources and can even turnout badly. Giving them extremely good deals or choosing "Nah, they can keep it." if the trader has the negotiator perk can greatly increase respect.

Try to trade with food. In middle stage of the game, if you have a good scavenging team you often end up with a lot of materials and equipment. But don't be too eager at selling them, because scavengable resources on the map are limited and in late game it is harder to come by these resources. Same goes for ammunition, medicine and fuel. Try to research farming techs, convert useless buildings into farms and deploy more farmers(After you have scavenged the whole map). What I am saying here is not that you cannot buy food when survivors are starving. But in the long term, exchanging other goods for food won't solve the problem and will drain other resources along with it.

Also, try to keep at least one equipment of each type, some factions might want certain equipment.